The COVID-19 pandemic is affecting people around the world, including Arkansans. ACHI will provide updates and insights on this evolving public health crisis.

To sort, click on the sort icon on the column header.

These tables show cumulative and active numbers of positive COVID-19 cases in Arkansas communities and school districts based on data from the Arkansas Department of Health. The counts do not include cases among incarcerated populations. We currently plan to update the tables weekly.

Community cases are listed in two categories, “Self-Reported City” and “Community.” Cases in the “Self-Reported” category are assigned based on cities of residence that individuals reported to the Department of Health. Cases in the “Community” category are assigned by matching individuals’ ZIP codes with the cities that the U.S. Postal Service has designated as being associated with those ZIP codes.

In partnership with the Arkansas Department of Education, ACHI is releasing school district-level data based on the overall population of each school district. Resident populations for school districts are from the U.S. Census Bureau’s American Community Survey – Education Tabulation based on 2014‒2018 estimates. Locations of cases are based on reported addresses and geographic Arkansas school district boundaries.

Interpretation of these rates requires ensuring an adequate number of underlying tests are being performed. Currently, we are utilizing the rates of tests per county population in the past two weeks to align with the numbers and rates of active cases per school district. The county testing rates reflect the rates in the counties where the school districts are located.

Community-level rates of positive COVID-19 cases are based on the number of active or cumulative cases in ZIP codes associated with each community and the total population reported for those ZIP codes. ZIP code and city associations are designated by the U.S. Postal Service, and ZIP code population estimates are from the U.S. Census Bureau 2018 American Communities Survey. Click here to view ZIP code assignments for cities.

“Isolation” and “quarantine,” two other terms often used in reference to avoiding the spread of illness, have similar but distinct meanings. Read More.

On July 14, the CDC posted a report on a hair salon in Springfield, Mo., where two stylists served a total of 139 clients between developing respiratory symptoms and testing positive for COVID-19. All involved wore face coverings, and no clients were known to be infected. The report shows how effective face coverings can be in preventing the spread of COVID-19.

What Cities and Towns Should Know During the COVID-19 Pandemic

ACHI and the Arkansas Municipal League hosted a video call on August 13, 2020, to discuss what cities, towns, and other state municipalities should know about the COVID-19 pandemic.

This video provides a quick glance at the immune system as it attempts to fight off the coronavirus.

The ACHI Health Policy Board’s position is that employers have an obligation to help achieve control of the COVID-19 pandemic, protect individuals, and minimize economic hardships in the state. All entities subject to the Arkansas Department of Health’s public health directives — including business-specific directives such as those for gyms, bars, and restaurants and general directives such as those for all businesses, manufacturers, and construction companies — should comply with those directives at a minimum. In addition, all public, private, and nonprofit entities that are not otherwise subject to a business-specific directive should adopt the following additional reasonable precautions in an effort to protect themselves from potential liability and to help prevent the spread of COVID-19 from customers and visitors to others including their own employees: 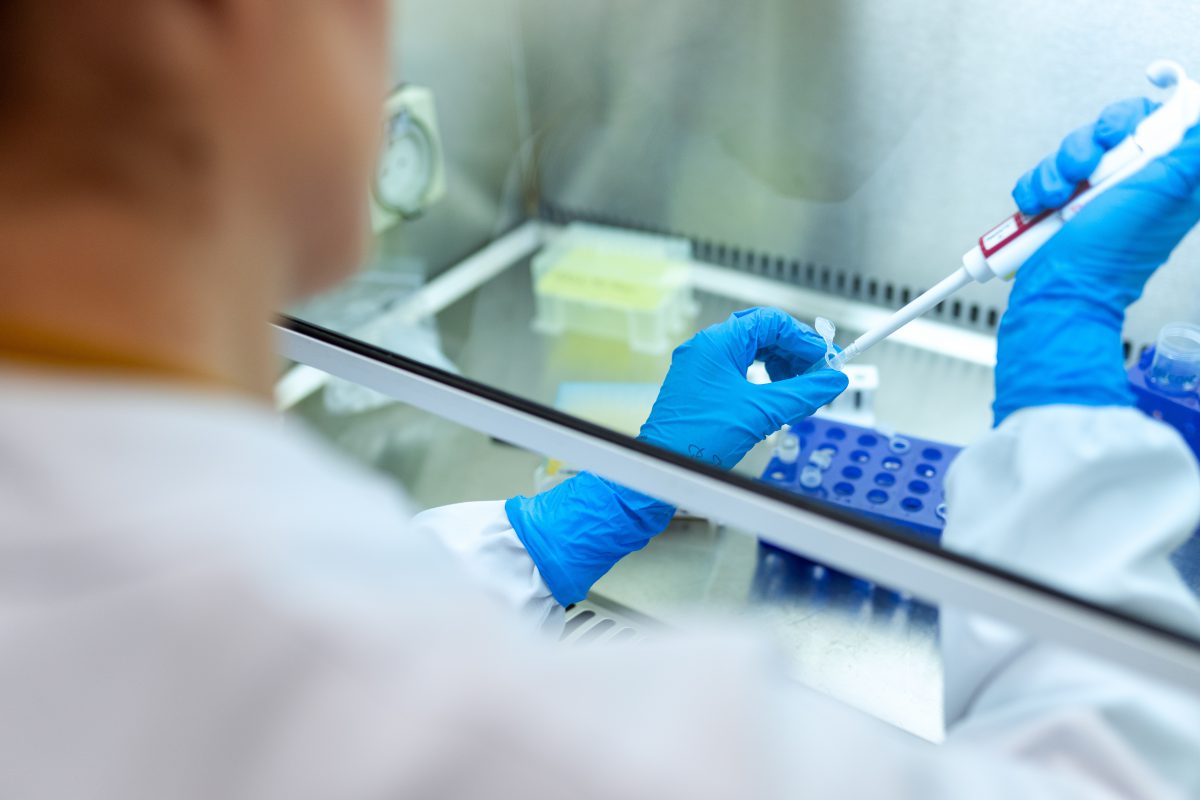 An important element of the response to the global COVID-19 pandemic is the development and implementation of testing. Our new explainer provides information on the types of testing used to identify COVID-19, recent testing developments, and policy considerations.

We have launched a series of blog posts explaining key terms and phrases used by public health officials in discussions of the COVID-19 pandemic.

Mechanical ventilators are machines that help to move air in and out of the lungs of patients with severe lung issues. Read More

In relation to COVID-19, an individual who is asymptomatic is infected with the new strain of coronavirus that causes COVID-19 but does not show symptoms of the disease for the duration of the infection. Read More

The doubling rate represents the number of days it takes for the number of COVID-19 cases to double, an indicator of how quickly cases are increasing. Read More.

On May 19, the CDC posted a report on a COVID-19 outbreak that occurred among members of an Arkansas church in March. At least 35 of 92 people who attended church gatherings with two symptomatic people acquired the illness, and three of them died. The church gatherings also were linked to 26 additional cases in the community, including one death.

On May 12, the Centers for Disease Control and Prevention (CDC) posted a report on a COVID-19 outbreak in Washington state. Among people who attended a March choir practice with one infected person, 87% developed the illness, according to the report. 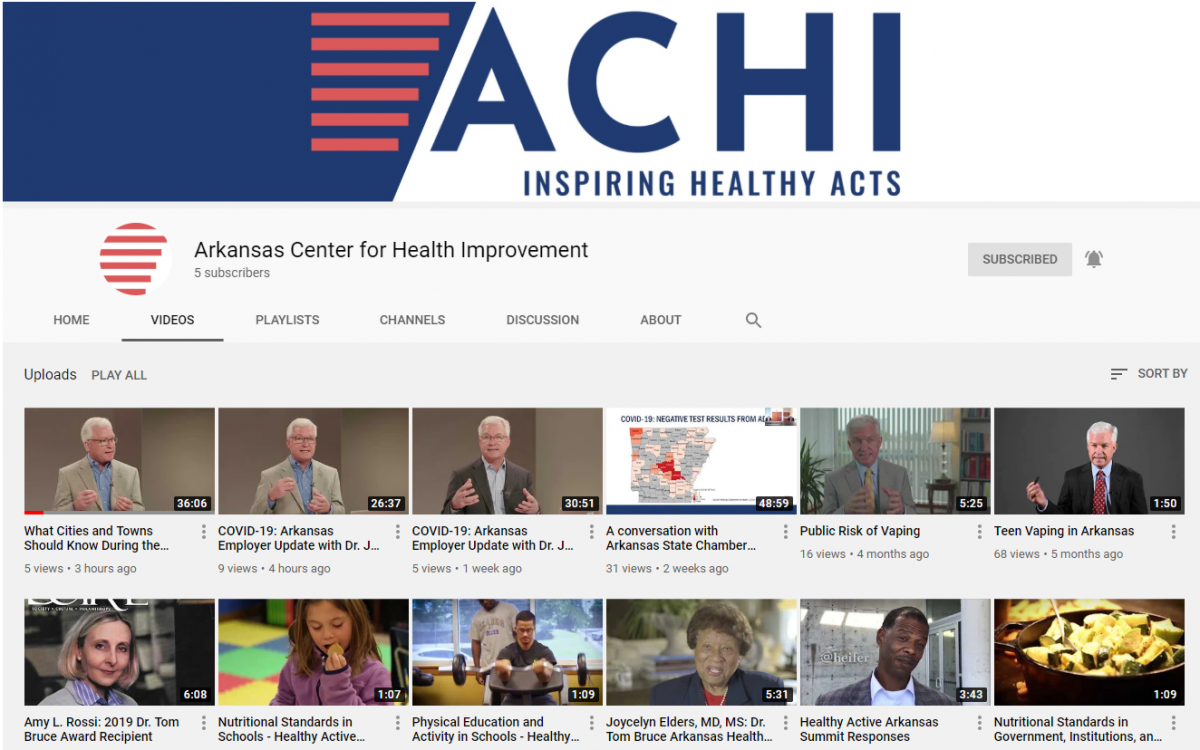 In partnership with the Arkansas State Chamber of Commerce, ACHI is participating in weekly video calls to update business leaders from across the state on COVID-19 and address their questions. Watch the video above for the August 6 update.

Special thank you to Waymack and Crew for providing space and equipment for hosting the call.

Gov. Asa Hutchinson and the Arkansas Department of Health have made a series of announcements regarding the lifting of some restrictions and guidelines intended to slow the spread of COVID-19. The White House has provided guidelines for the phased reopening of states, although states are not bound by them.

Reopening decisions announced to date include:

The Arkansas Department of Health (ADH) is tracking statewide cases, and more information can be found here.

The White House has issued guidelines for slowing the spread of COVID-19.

The CDC posts regular online updates with latest guidelines and information on COVID-19.

UAMS: Click here for screening information, including drive-thru screenings and phone screenings. Their COVID-19 Hotline is 1-800-632-4502.

A Balancing Act: Finding a Way Forward in Pandemic

Liability Policy Should Make Businesses a Part of the COVID-19 Solution, Not Excuse Them

The Impact of COVID-19 on the Minority Population

Your Disruption Is Another Person’s Devastation

Social Distancing: The Importance of the ‘6 Feet Rule’

Into the Woods: Healthcare Rule’s Happily Ever After

One-Third of Medicare Beneficiaries Hospitalized for COVID-19 Have Died or Been Discharged to Hospice, New Data Show

The Effect of COVID-19 on Health Insurance Coverage in Arkansas

ACHI Board Urges Employers to Combat Viral Transmission in the Workplace