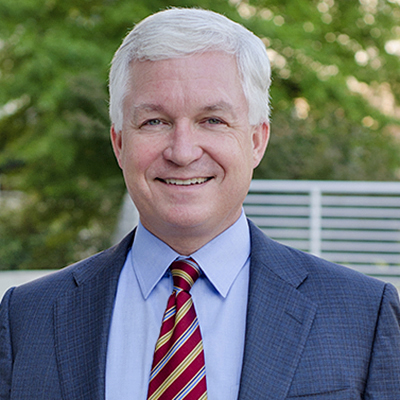 Dr. Joe Thompson’s work is centered at the intersection of clinical care, public health, and health policy. He leads the Arkansas Center for Health Improvement in its current efforts to address emerging and legacy health issues through individual choice and influential policy.

Dr. Thompson led vanguard efforts in planning and implementing healthcare financing reform, health promotion, and disease prevention efforts in response to health threats from tobacco and obesity, and emergency response efforts during periods of crisis. He worked with Arkansas’s executive and legislative leadership and the U.S. Department of Health and Human Services to develop a creative alternative to Medicaid expansion under the Patient Protection and Affordable Care Act and led efforts to evaluate the program’s results.

From 2005—2015 Dr. Thompson served as Surgeon General for the State of Arkansas for Gov. Mike Huckabee, a Republican, and Gov. Mike Beebe, a Democrat. As Surgeon General, Dr. Thompson worked closely with and served as a bridge between the Governor’s office, the Arkansas legislature, and public and private organizations across the state to develop relevant health policy initiatives. Previous accomplishments include serving as the lead architect of the Tobacco Settlement Act of 2000 and instituting the Arkansas Health Insurance Roundtable. Under his leadership, ACHI helped pass the Clean Indoor Air Act of 2006, documented the state’s success in halting progression of the childhood obesity epidemic, and passed a tobacco excise tax increase to provide funding for more than two dozen health initiatives, including the state’s trauma system.

Dr. Thompson has been at the forefront of both Arkansas’s leading-edge efforts against childhood obesity and in national efforts to reverse childhood obesity as the former Director of the Robert Wood Johnson Foundation (RWJF) Center to Prevent Childhood Obesity.

Dr. Thompson earned his medical degree from the University of Arkansas for Medical Sciences and a Master of Public Health from the University of North Carolina at Chapel Hill. He was an RWJF Clinical Scholar at the University of North Carolina at Chapel Hill, a Luther Terry Fellow in Preventive Medicine advising the U.S. Assistant Secretary of Health in Washington, DC, and the Assistant Vice President and Director of Research at the National Committee for Quality Assurance in Washington, DC. In 1997, he served as the First Child and Adolescent Health Scholar of the U.S. Agency for Healthcare Research and Quality (then the U.S. Agency for Health Care Policy and Research) before returning to Arkansas.