In July, Arkansas Medicaid began reimbursing healthcare providers for the administration of a flu vaccine, a move that may incentivize more clinicians to offer the vaccine at a time when it is critical for Arkansas to improve its flu vaccination coverage rate because of the COVID-19 pandemic.

Previously, the state Medicaid program reimbursed healthcare providers for the cost of a flu vaccine but not for administering the vaccine, ACHI found in a flu vaccine cost analysis conducted at the request of the Arkansas Office of the Medicaid Inspector General.

Our team reviewed insurance claims data from the Arkansas All-Payer Claims Database, a part of the Arkansas Healthcare Transparency Initiative, and compared reimbursement rates paid in Arkansas in 2017 by Medicaid and a large private insurer for flu vaccines and administration of flu vaccine to adults ages 21 to 64. As shown in the graphic below, the median reimbursement rates paid by the private insurer were about $4 more than Medicaid paid for flu vaccines and about $26 more than Medicaid paid (zero) for administration. 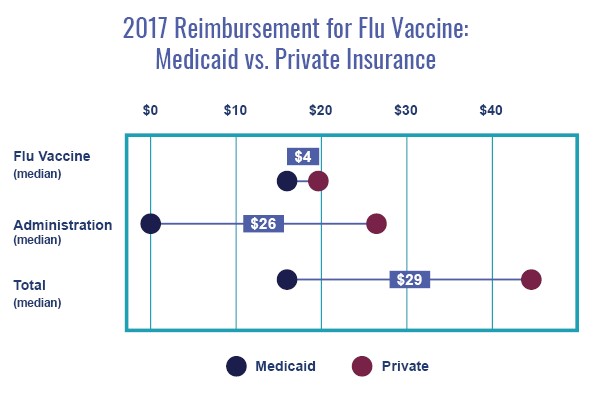 While flu vaccinations are always encouraged during flu season, public health experts have emphasized the heightened importance of flu vaccinations during the COVID-19 pandemic. Flu vaccinations can reduce the chances for people to get the flu and COVID-19 at the same time, as well the possibility for hospitals to become overwhelmed treating patients for both illnesses.

Centers for Disease Control and Prevention data show that nationally, flu vaccination coverage among adults during the 2019‒2020 flu season was 48.4%. Arkansas’s rate for the same season was 51.7%, slightly higher than the national average but well below the rate needed to achieve herd immunity.

In light of COVID-19, it is vital that Arkansans get their flu vaccinations and improve the state’s flu vaccination coverage rate. Increases in vaccine reimbursement rates are a good starting point for Arkansas to increase access. In addition, over $1 million in targeted Coronavirus Aid, Relief, and Economic Security (CARES) Act funding has been released to the state to support scaling up flu vaccine preparedness efforts. The state’s CARES Act Steering Committee has allocated $8.77 million to the Department of Human Services and the Arkansas Chapter of the American Academy of Pediatrics to reimburse pediatricians for vaccine outreach efforts.