The latest installment of an annual national report ranking U.S. counties by health factors and health outcomes finds that disparities persist between urban and rural parts of Arkansas. The disparities mostly favor urban counties over rural counties, although an exception is in COVID-19 deaths rates, which according to the report were highest in the state’s most populous urban counties in 2020.

The lowest reported COVID-19 age-adjusted mortality rates in 2020 were in Izard and Madison counties, with 10 deaths per 100,000 people reported in each. The report does not include COVID-19 mortality rates for Calhoun, Lafayette, Perry, or Woodruff counties.

The report states that later installments will demonstrate long-term effects of COVID-19 on the health of Americans, while specific measures from this year’s report such as unemployment, children in poverty, and median household income are based on 2020 data and may reflect pandemic-induced changes.

The report ranks each state’s counties for overall health factors and overall health outcomes among county residents. This year’s report includes a focus on socioeconomic factors ”• including living wage, gender pay ratio, childcare burden costs, and school funding adequacy. By measuring how multiple behavioral, clinical, environmental, physical, and social outcomes can contribute to an individual’s overall health, the report demonstrates the disparities that exist between regions in Arkansas and highlights ways these disparities can be reduced.

The report ranks Benton, Washington, and Saline counties as first, second, and third, respectively, in Arkansas in terms of overall health outcomes. The lowest-ranked counties are Mississippi (73rd), Monroe (74th), and Phillips (75th) ”• and other Delta counties also tend to rank below counties in other parts of the state. Monroe and Phillips counties had the same rankings in last year’s report, but last year’s 73rd-ranked county, Desha, moves to 72nd this year.

Measures used to calculate health outcomes include quality of life (low birthweight rate and self-reported health status) and length of life. For 2021, Arkansas ranks lower than national estimates across these health measures.

The report also ranks counties for health factors including health behavior, clinical care, social and economic factors, and physical environment. For overall health factors, Benton, Saline, and Washington rank first, second, and third, respectively, while Lee (73rd), Chicot (74th), and Phillips (75th) are the lowest-ranked. Arkansas falls below national estimates for 26 of the 34 health outcomes measures. Some of these measures include: 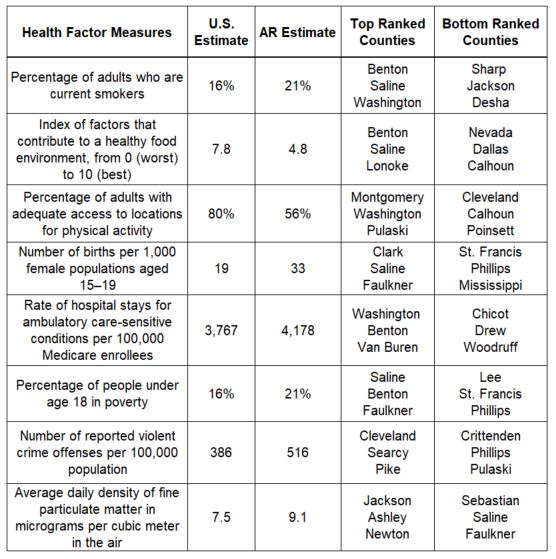 Arkansas estimates that are equal to or better than national estimates include:

Another aspect of this year’s report is a focus on economic stability. Economic stability, or the ability to pay for basic needs such as housing, education, childcare, food, and medical care, is associated with higher indicators of health. The 2022 report highlights childcare cost burdens. The U.S. Department of Health and Human Services suggests a benchmark of child care costing no more than 7% of a household income. Currently, no state meets this benchmark; the national average for childcare cost burden is currently 25% of a household’s income. In Arkansas, the state average is 23%, with larger suburban metro counties experiencing an average of 29%. Childcare cost burden also varies greatly by county, with Cleveland and Grant counties experiencing the lowest cost at 17% and Phillips reporting 51% of household income being spent on childcare costs.